Congratulations to the City of Abilene, Texas. As reported on August 12th by the Abilene Reporter, The Abilene City Council made the community’s vision for the downtown reality with the approval of funding for the city’s downtown hotel project and a ground lease/city facilities lease for the project’s convention center portion.  Gossman Group is pleased to have supported this project by developing the original design concepts for the new hotel as part of a newly imagined festival district. The RFP for the hotel was also crafted by Craig Gossman and attracted 10 proposals.  Located in West Texas, the City of Abilene and the Abilene Industrial Foundation had previously commissioned a City-wide economic development plan that identified the Center City as a major asset that could be strategically leveraged to better position Abilene to attract employers.  Disappointed by a lack of interest from investors in the downtown, the City and Foundation engaged Gossman Group to help the community identify a vision for the town’s historic downtown and identify catalytic projects to attract investment.  Out of this planning came the idea for a new hotel adjacent to the City’s existing convention center.  The facility will be a DoubleTree by Hilton location, managed by Hilton. Funding for the roughly $82 million project is a mix of public-private partnership, a $15 million gift from the Abilene Improvement Corporation given by anonymous donors, and specialized legislation that allows reinvestment of the local hotel occupancy tax.  The hotel is being developed by Garfield Public Private out of Dallas, TX and designed by BOKAPowell Architects with offices in Dallas, Fort Worth and Austin, Texas as well as Denver, Colorado. 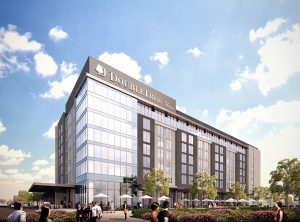